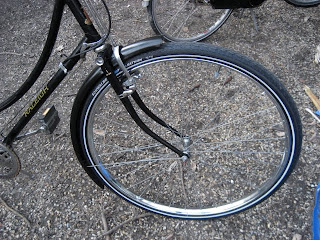 A couple of updates:
Back when Minerva first entered the family and I was cleaning her up, I decided that the front fender had a bit too much rust, and decided to strip first, ask questions later.  What started as stripping down "the bad spots"  ended up with a bare metal fender,  followed by a primed fender, followed by a visit to an automotive paint supplier who told me to take the primer back off because Rustoleum has fish oil in it that interferes with regular paint.....

Long story and a lot of sanding later,  I took the fender (and a bunch of other stuff) to be powdercoated by Scott at Long Beach Custom Fabrications down in Plymouth.  I think he charged me $10 for the fender.

The thing that I love about it (besides the fact that the paint finish is bombproof)  is that he had a great almost matt-but-not-quite  black finish that looks great with the vintage paint on the rest of the bike.
I took advantage of the lovely weather we had on Sunday to pull Minerva out of the basement, put the fender on and run a couple of errands.  I still feel a little awkward with her slightly narrower handlebars and slightly more forward position, and I'm no further along with the "carrying stuff" issue.
She rides rock solid though-  I can never go "no hands" with Robert, and Minerva just tracks dead straight without any fuss.  Longer wheelbase, more rake to the fork, who knows,  just really comfortable.
I think that I mentioned it before, but I bought a full chain case for Minerva,  and spent many hours sanding off the paint, only to find out that it doesn't quite fit.  Somervillian and the nice guys at Open had some suggestions for making it fit, but I'm not sure I'm up for doing it myself.  This weekend, I decided I'm still going to send it to be powder coated (est cost $20) and then take it to Harris, who managed to get the exact same chaincase to fit Lovely Bicycle's Velouria, who is only a year "younger" than Minerva is.  I spoke to the expert at Yellow Jersey bicycles in Madison (whom I bought it from),  who actually had them all custom made to the old Raleigh specs.  He said he has personally fitted one of these to a 1970 DL-1,  so I suspect it can be done with enough patience and fortitude. He sent me a follow up email with suggestions that sounded complicated and is going to send me a free half size chain link that he thinks will do the trick.  I'm vacillating between trying it myself, and just turning it over to Harris and say "make it so"
Finally, although the "cheap but bright" headlight was much commented on,  I decided that the basket wasn't really working (or rather the support wasn't really working- it racked terribly under even a light load). So I removed basket and light when I installed the fender
(the light may make another appearance in the two eyed rack).
I made a semi- impulse purchase of a 2 watt Planet Bike Blaze Sunday at Cambridge Bicycle.  I'd seen someone riding with one, and it was impressively bright enough to make me stop them and inquire about it, and when I saw it, decided to make it mine.  Having ridden with it briefly, I'll say that it does seem objectively quite bright,  and the strobe setting is impressively eye-catching from at least a block away,  but I'm beginning to understand why all the light mavens obsess about "beam pattern" and optics.  The Edeluxe has a much more useful beam- it really lights the road much better and creates more usable light for it's wattage.
The weather was so nice that I decided to ride Minerva in to work today. (and I only hacked up a lung twice on the ride in and for about half an hour after I arrived- God bless my patient pod-mate who must be really tired of my pulminary woes by now)  One thing I notice, is that she's fast! I'm surprised how quickly I got to work without hardly trying.  And despite the lingering awkwardness, she's a lot of fun!
Thanks again to Somervillan  who gave me a primer on sturmey archer adjustment.  A couple of quick tweaks at stoplights on the way home and I think I'm completely functioning in all three gears now!
Posted by cycler at 9:49 PM