Spring seems to have finally sprung in Boston!
I say seems because it's not uncommon in these parts for mother nature to get us all excited about longer and warmer days, only to slap us down with a week of 33 degree rain. 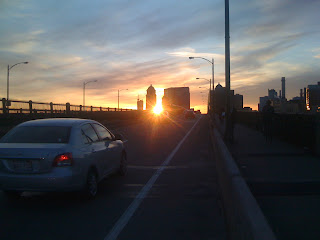 Thanks to the time change, I got to ride home in daylight for the first time in what feels like forever:
I stopped at the regular grocery store for Gatorade for the Scientist who has the Stomach flu- hopefully the 24 hour kind.  Then I went to Trader Joe's where I bought a case of wine.  The stock guy was overly solicitous- worried that I couldn't carry it to the front of the store.  I wanted to tell him- honey, I'm about to carry it 2 miles home on my bike, so if I can't get it to the front of the store, I have other problems!
I think this is about the limit of what I can reasonably carry on Robert.  I was super wobbly at low speed. 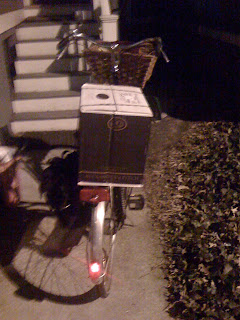