So, back in October when I was wringing my hands about preservation and utility,  I decided to buy an old but not "vintage"  frame and fix it up.

After a bit of deliberation about the peculiarities (weird threadings, odd sized bolts)  of Raleighs, I bought a 70's era step through frame from the nice guys at Metonomy/ Cambridge Used Bikes for $50.  I did a lot of work stripping the paint myself,  and I found that a $1 brass wire brush from Sears, mounted in my drill worked great for that- stripping the paint without damaging the finish.  I was originally planning on taking it to Sugarcoat, which is why I was trying to save money by stripping it myself.   However, instead I ended up taking it down to Plymouth to a guy I originally contacted on Craig's list, and later got good references for from Somervillian.

The bike in its original state was dull silver with 70's typography,and  lots of surface rust spots, but had a solid geometry similar to a complete vintage bike I'd ridden and liked.I'm sure that I took pictures of the bike "before" but I'll be damned if I can find them.  You'll just have to trust me that it looked a lot like a bike that's been abandoned chained to a light post 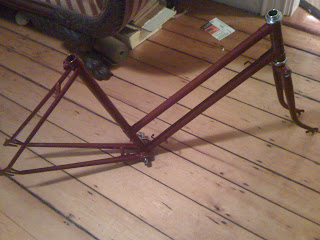 It's back from the powder coater's and now it's a dark blood red (although in retrospect, I wish I'd gone one shade darker!).  It's going to be my daily ride for a while.  My current plan is to scavenge some of the expensive bits of Robert (the dynohub, the internal geared rear wheel) and add some new parts (the two-eyed rack everyone loved).   The longer term plan is to take Robert for powdercoating and then rebuild him with maybe slightly less high tech parts. 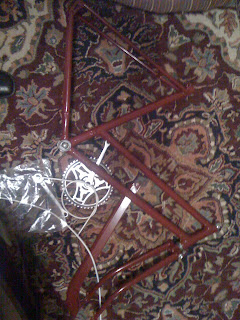 I took advantage of the warm weather a week ago  when it came home to start working on it.
The first thing I did was spray Frame Saver in it.  This is a messy process, and best done outside over a bunch of newspapers.  It seems to basically be some kind of oily goo suspended in a petroleum solvent that allows you to distribute it through the frame.  You spray it in the various holes,  shake and tilt the frame to distribute it evenly, and let it off-gas outside for an afternoon.

Then I cleaned  a bit of the overspray off with an exacto knife. 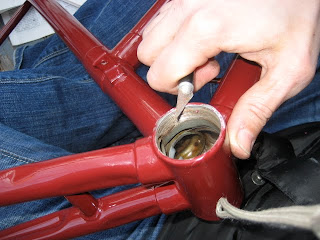 Next, following Sheldon Brown's instructions,  I screwed in the fixed cup of the bottom bracket. 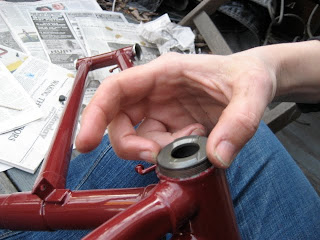 Then I turned the bike over and applied a liberal amount of Phil Wood's waterproof grease.  I should have probably done this before putting the cup in, because I couldn't get the nozzle of the grease tube in enough to get it on the far side of the bottom bracket shell.  I used a bamboo skewer (very technical tool) to deliver it to the installed cup. 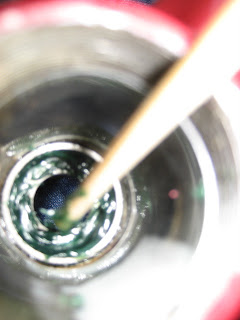 I then plugged the hole with my finger and dropped the ball bearings in, pushing them into the grease with the skewer as necessary. 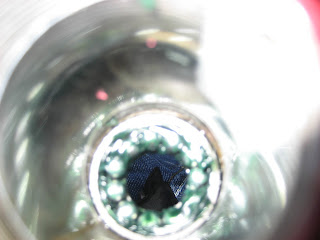 Sorry for the lousy photos,  I couldn't figure out how to over-ride the camera's focus plane very well, and the macro mode didn't seem to help.
The light was failing by this point,  but the next step was to grease up the adjustable cup and fill it with ball bearings, put the short end of the spindle in the adjustable cup,  and holding them together so that the BBs stay in place, lower the long end of the spindle into the BB shell against the fixed cup BB's.
I got it tightened enough that everything is held in place,  but I was getting a lot of resistance to further tightening of the adjustable cup while still having a lot of play in the spindle, so I stopped.
Unfortunately I didn't get any pictures, but I assembled the headset BB races,  which were a lot simpler.  The headset doesn't turn completely smoothly, so I might have to take it all apart and do a bit more sanding and smoothing- now that I know how easy it is to dis and re-assemble, I won't hesitate if it gives me problems once the handlebars are in.
That's all for now- brakes and brake cables are the next step once they arrive.
Posted by cycler at 11:54 PM