Sorry to mix my boston vernacular and my geek vernacular, but this is the coolest bike I've seen in a LONG time. 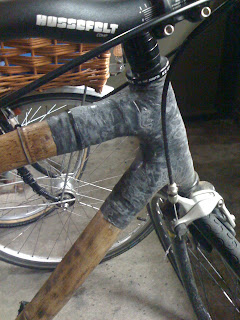 It was so cool, that I was accosting random strangers (with bike helmets) in Trader Joe's asking them if it was their bike
I was so excited when I saw it because I actually brought my real camera with me today, only to be disappointed when it was out of batteries. So sorry for the lousy pictures.  I was so excited that I completely forgot to lock Robert up, Thankfully he was still there when I returned.  I probably spent 5 minutes rapping my ring against the tubes trying to make sure they were actually bamboo and not some clever simulacrum. 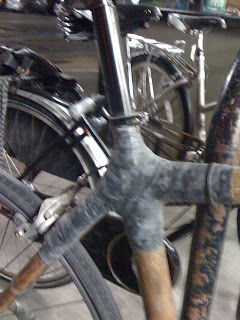 So, this bike appears to have been custom handbuilt from bamboo and gaffers tape!  Gaffers tape is the matte black version of duct tape used in theatrical work. I could be wrong, it could be fiberglass tape and resin.  Either way, it's incredibly cool! 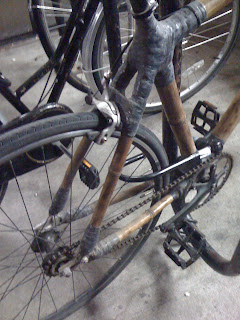