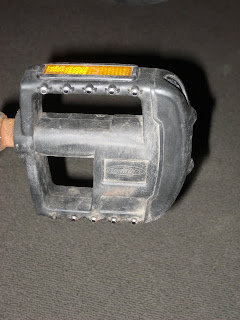 About a month ago I realized that one of my cool flashing pedals wasn’t flashing any more.  I was kind of bummed, because they were kind of pricy, and I was sad to lose that extra attention getting flash.
I thought maybe I’d try to open it up, clean it out and see if there were any obviously broken or corroded electrical connections.
I was poking around on the internet looking for information, and noted a post from the Pedalite customer service manager asking anyone with problems with the pedals to contact him so that he could try to solve the problem (before they become disgruntled ex-customers spreading ill will on the internet)
So I emailed him last Wednesday, at the address he provided in his post, and he contacted me the next day asking for a photo of the defective pedal and my shipping address.  He said that even though their warranty was normally a year, they wanted the products to last a lot longer than that,  and were willing to replace the defective pedal despite the fact that I’d had mine 18 months.
I was out sick again on Monday (2010 has been a year of plague in our household- sniffle)  but arrived to work today to find a tidy package bearing the Royal British Mail stamp, with a new pedal enclosed!
Super fast,  no paperwork, no five copes of my proof of purchase, no quibbling about the warranty date-  what excellent customer service!
Plus the blinking lights are very noticeable!  Put me down as a fan.  I was at Harris Cyclery Saturday (they started carrying the Pedalites a while after I bought them) and let them know so that they could help anyone else who has a failure.
Disclaimer in case you might think I'm a shill:
I bought these pedals at a bike store in Portland for retail.   The only financial “compensation” I’ve received is the warranty replacement.
Posted by cycler at 4:52 PM